You are here: Home / Purposeful Faith / Knowing God & The Bible / Satan, Self, or Savior

I believe the primary feeding ground for disobedience isn’t actually rebellion.  I mean, as born again Christ followers, we are no longer enemies of God, but rather actively trying to walk in agreement with His will.  For this reason, I don’t think rebellion is the main issue. 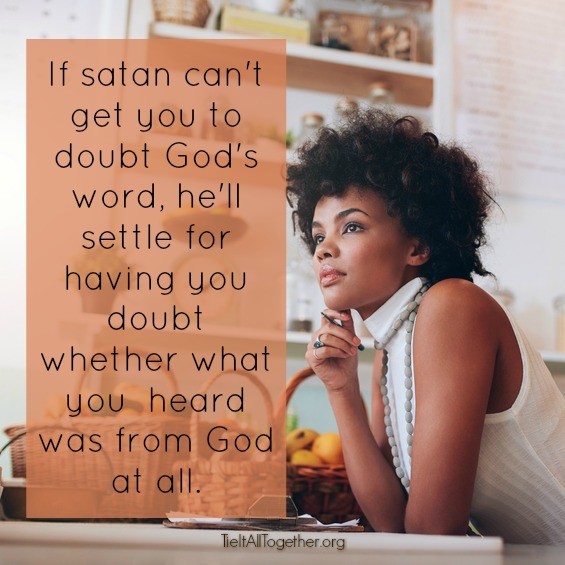 No, I believe a great deal of our disobedience stems from the uncertainty we have about hearing God’s voice.

I am not just speaking of a lack of faith in God; I’m talking about a lack of faith in your own ability to discern His voice.  How many times have you failed to move on an instruction from God simply because you weren’t sure you heard it from Him?  Or that you’ve heard correctly?  Do you ever ask yourself: Does God really speak to me?  Can I really hear the voice of God? What do people mean when they say, “the Lord told me…” or “I heard God say…”  What does his voice sound like? How can I be sure it’s God’s voice and not my own?  What if the devil is trying to seduce me away from grace?So let’s deal with the doubt by differentiating between the voices of satan, self, and our Savior.

He is the father of lies and his directive is to kill, steal, and destroy—and not just your physical life.  He wants to steal your spiritual inheritance, destroy your life (experience), and kill your soul.  He masters in alternative facts and deception.  Since the Garden of Eden, he has mixed just enough truth, with a hint of deception in order to lead God’s people into sin.
You can expose satan’s voice because it always involves lies, deception, or some distortion of God’s truth.

Lies: Genesis 3:4 “You will not certainly die,” the serpent said to the woman. 5 “For God knows that when you eat from it your eyes will be opened, and you will be like God, knowing good and evil.”  Satan outright called God a liar and led Eve to believe He was holding out on her and Adam.  Deception: 5 The devil led him up to a high place and showed him in an instant all the kingdoms of the world. 6 And he said to him, “I will give you all their authority and splendor; it has been given to me, and I can give it to anyone I want to. 7 If you worship me, it will all be yours.” 8 Jesus answered, “It is written: ‘Worship the Lord your God and serve him only.’”   Satan tries to tempt Jesus to sin by offering his finite, second-hand authority—authority far inferior to what Jesus is already endowed with.  Distortion of truth: 9 The devil led him to Jerusalem and had him stand on the highest point of the temple. “If you are the Son of God,” he said, “throw yourself down from here. 10 For it is written: “ ‘He will command his angels concerning you to guard you carefully; 11 they will lift you up in their hands, so that you will not strike your foot against a stone.’ ” 12 Jesus answered, “It is said: ‘Do not put the Lord your God to the test.’”  Satan knows the scripture too, and he’s not above using them in an attempt to lure Jesus into sin.

The reasons I had to study the Bible for myself and get to know God more intimately, was because of someone very close to me that I loved and respected dearly.  He became a bible scholar at a very young age and can reference the scriptures and break them down as well as many seminary scholars or pastors.  I found myself listening to him drop bible knowledge to support a decision or course of action that I disagreed with. I would often walk away uncertain and confused. I knew what he said was scripture based, but it didn’t seem right somehow.  So I started digging for myself, and sure enough, over time I became able to discern the rightly divided truth from deception or distortion (2 Tim. 2:15). I’m not saying he was satan, but I am acknowledging that satan is able to use and influence people.  So, open up your bible and study it for yourself!  Memorize it.  Tuck into the deep recesses of your heart.

Self – your inner voice

Your inner voice can be swayed by past memories, situations, circumstances, and the words or actions of people of influence or authority in our lives.  It’s highly likely that your inner voice—like mine—is a sanctifying work in progress!  The strongholds the devil constructed in my mind were developed and reinforced more than 20 years!  I didn’t meet Jesus personally, until late into college.  That is two decades of wrong thinking, godless perspectives, and ratchet defense mechanisms. My inner voice has to constantly be checked and brought into line with who God truly is, and what God says in scripture.

Your internal voice can only be trusted to the extent that it aligns with the truth of God’s word.

II Corinthians 10:3-5 served as life support during the early days of my transformation (Rom 12:2).  The pain of realizing I had been duped into believing self-sabotaging lies, and relying on self-limiting behaviors was agonizing.  Tearing down strongholds by continuously confronting those godless perspectives and negative thought patterns, was exhausting. For a time, I felt like I spent every minute of the day “casting down imaginations” and “high things”.  I would literally ask myself, “Is this a high thing?”

Cooperating with the Holy Spirit to change the tone of your internal voice requires renewing your mind.  This has been one of the toughest spiritual lessons I’ve had to learn.  In spite of how long or how hard it may seem, it is absolutely possible for your inner voice to be transformed too.  The very fact that the Bible calls for us to renew our minds (Rom. 12:2) and promises the mind of Christ (I Cor 2:16) assures us that the Holy Spirit is here to help us actually do it.   Which leads me into:

Savior – How to know God’s voice

I’ve known my mother all my life—she raised me.  We no longer live in the same state, so now, most of the time we spend together is by phone or FaceTime.  When she calls the house or even my cell phone, I say hello, and she commences the conversation.  She doesn’t ask to speak with me, she just knows it’s me by simply hearing my “hello”.  The reverse is also true.

Occasionally, one of the children will answer the phone instead, in which case she will respond with a one-word question:  “Jasmine?” or until recently with the change in his voice, “Thomas?”  A simple hello and she can identify who she’s speaking with.  How?  Relationship!  She knows our voice, and we know hers.  There have been times when she doesn’t catch the difference at hello, but believe me when I tell you the conversation never gets too far before she makes the realization.  She might be clued in by something in their tone, or on the basis of what they are saying, but something always raises the red flag.

With the help of His Holy Spirit, we come to know God primarily through the Scriptures, and through prayer and worship.  What do all of these elements have in common? They involve you and Your God!  Fellowship.  Communion.  Time together.  Dating. Hanging Out.  Whatever you want to liken it to, involves developing a fondness with your Savior.  The years spent with my mother lead to our ability to recognize each other’s voice.  As you spend time with God, you learn to recognize His voice.

The key to discerning the voice of God is RELATIONSHIP.

First, and most important in discerning God’s voice is the Bible.  It is through the Bible that we learn the character of God and become familiar with His heart toward His people and all of creation.  It is through the scriptures that we learn to recognize truth and understand His standard of righteousness.  It is the standard by which all other revelation is measured.  God’s voice, regardless of how He chooses to speak, will never contradict the Bible. 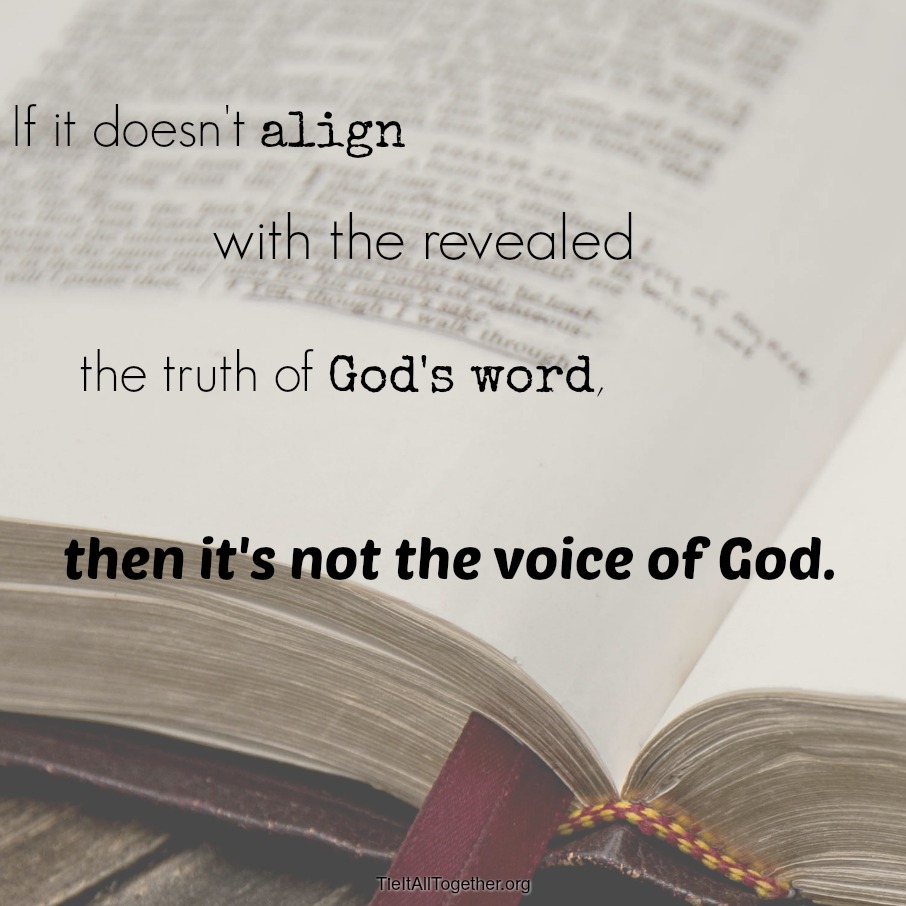 It’s unreasonable to expect that we will memorize the entire bible.  Jesus teaches that the Holy Spirit, as our helper and teacher will help us to remember that which He has taught.  When God reveals scriptures to you that speak to your heart need, hold tight to those.  Commit them to memory, and recall them often.  By doing so, you will fine tune your hearing as well as begin to see the alignment between your own inner voice and God’s will.

Dear friends, if you take nothing else from this post, remember this:

If it doesn’t align with the revealed truth of God’s word, then it’s not the voice of God!